In this article I will give step-by-step instructions for reproducing the experiments in the World Models article (pdf). The reference TensorFlow implementation is on GitHub.

Other people have implemented World Models independently. There is an implementation in Keras that reproduces part of the CarRacing-v0 experiment. There is also another project in PyTorch that attempts to apply this model on OpenAI Retro Sonic environments.

For general discussion about the World Models article, there are already some good discussion threads here in the GitHub issues page of the interactive article. If you have any issues specific to the code, please don’t hessitate to raise an issue to discuss.

I recommend reading the following articles to gain some background knowledge before attempting to reproduce the experiments.

A Visual Guide to Evolution Strategies

Read tutorials on Variational Autoencoders if you are not familiar with them. Some Examples:

Be familiar with RNNs for continuous sequence generation:

A Neural Representation of Sketch Drawings

I have tested the code with the following settings:

I use a combination of OS X for inference, but trained models using Google Cloud VMs. I trained the V and M models on a P100 GPU instance, but trained the controller C on pure CPU instance with 64 cpu-cores (n1-standard-64) using CMA-ES. I will outline which part of the training requires GPUs and which parts use only CPUs, and try to keep your costs low for running this experiment.

You only need to clone the repo into your desktop computer running in CPU-mode to reproduce the results with pre-trained models provided in the repo. No Clould VM or GPUs necessary.

If you are using a MacBook Pro, I recommend setting the resolution to “More Space”, since the CarRacing-v0 environment renders at a larger resolution and doesn’t fit in the default screen settings.

In the command line, go into the carracing subdirectory. Try to play the game yourself, run python env.py in a terminal. You can control the car using the four arrow keys on the keyboard. Press (up, down) for accelerate/brake, and (left/right) for steering.

To run the pre-trained model once and see the agent in full-rendered mode, run:

Run the pre-trained model 100 times in no-render mode (in no-render mode, it still renders something simpler on the screen due to the need to use OpenGL for this environment to extract the pixel information as observations):

To run the pre-trained controller inside of an environment generated using M and visualized using V: 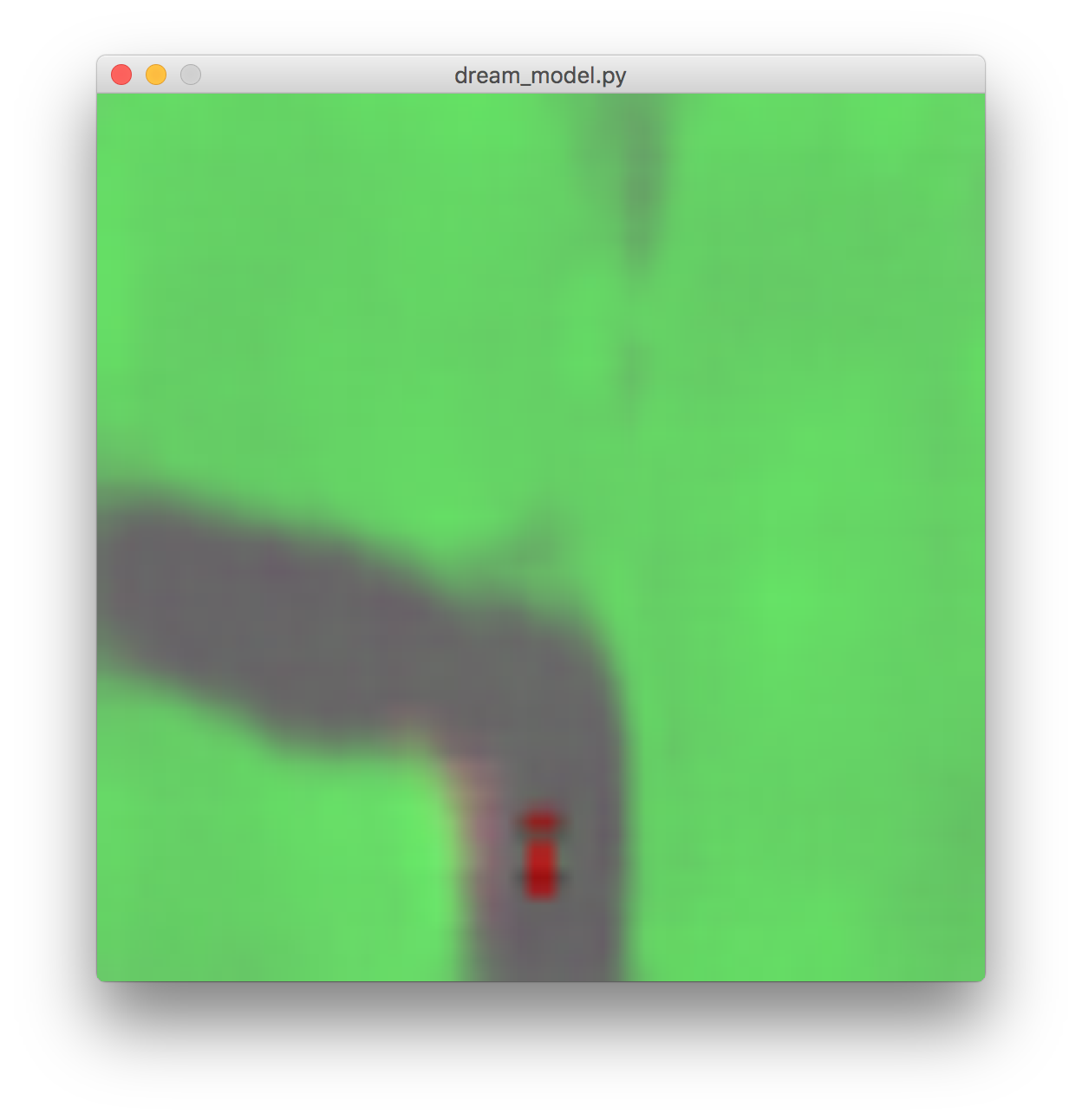 In the doomrnn directory, run python doomrnn.py to play inside of an environment generated by M. 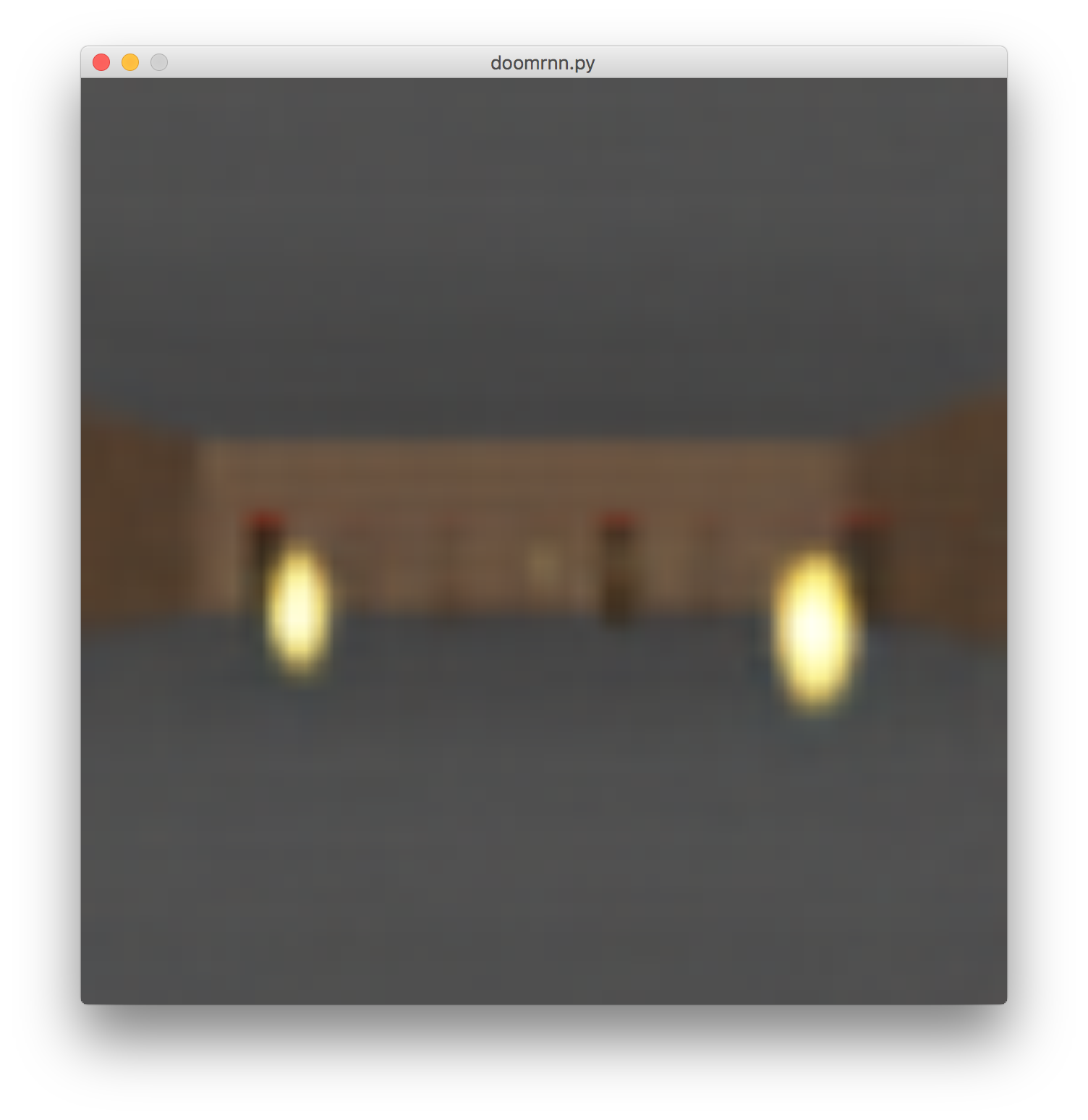 You can hit left, down, or right to play inside of this envrionment. To visualize the pre-trained model playing inside of the real environment, run:

Note that this environment is modified to also display the cropped 64x64px frames, in addition to the reconstructed frames and actual frames of the game. To run model inside the actual environment 100 times and compute the mean score, run:

You should get a mean score of over 900 time-steps over 100 random episodes. The above two lines still work if you substitute doomreal with doomrnn if you want to get the statistics of the agent playing inside of the generated environment. If you wish to change the temperature of the generated environment, modify the constant TEMPERATURE inside doomrnn.py, which is currently set to 1.25.

To visualie the model playing inside of the generated environment, run: 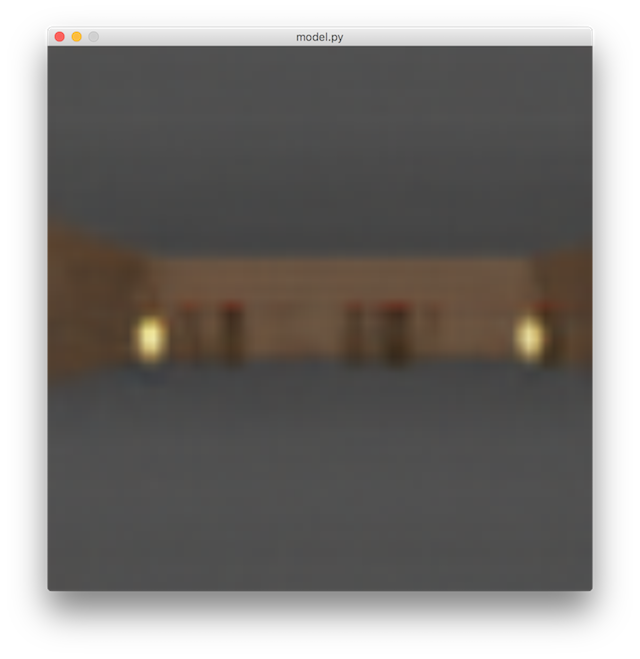 Instructions for training everything from scratch

The DoomTakeCover-0 experiment should take less than 24 hours to completely reproduce from scratch using a P100 instance and 64-core CPU instance on Google Cloud Platform.

I will discuss the VizDoom experiment first since it requires less compute time to reproduce from scratch. Since you may update the models in the repo, I recommend that you fork the repo and clone/update on your fork. I recommend running any command inside of a tmux session so that you can close your ssh connections and the jobs will still run on the background.

I first create a 64-core CPU instance with ~ 200GB storage and 220GB RAM, and clone the repo in that instance. In the doomrnn directory, there is a script called extract.py that will extract 200 episodes from a random poilcy, and save the episodes as .npz files in doomrnn/record. A bash script called extract.bash will run extract.py 64 times (~ one job per CPU core), so by running bash extract.bash, we will generate 12,800 .npz files in doomrnn/record. Some instances might randomly fail, so we generate a bit of extra data, although in the end we only use 10,000 episodes for training V and M. This process will take a few hours (probably less than 5 hours).

On the GPU machine, run the command bash gpu_jobs.bash to train the VAE, pre-process the recorded dataset, and train the MDN-RNN.

This gpu_jobs.bash will run 3 things in sequential order:

1) python vae_train.py - which will train the VAE, and after training, the model will be saved in tf_vae/vae.json

2) Next, it will pre-process collected data using pre-trained VAE by launching: python series.py. A new dataset will be created in a subdirectory called series.

3) After this a series.npz dataset is saved there, the script will launch the MDN-RNN trainer using this command: python rnn_train.py. This will produce a model in tf_rnn/rnn.json and also tf_initial_z/initial_z.json. The file initial_z.json saves the initial latent variables (z) of an episode which is needed when we need to generate the environment. This entire process might take 6-8 hours. 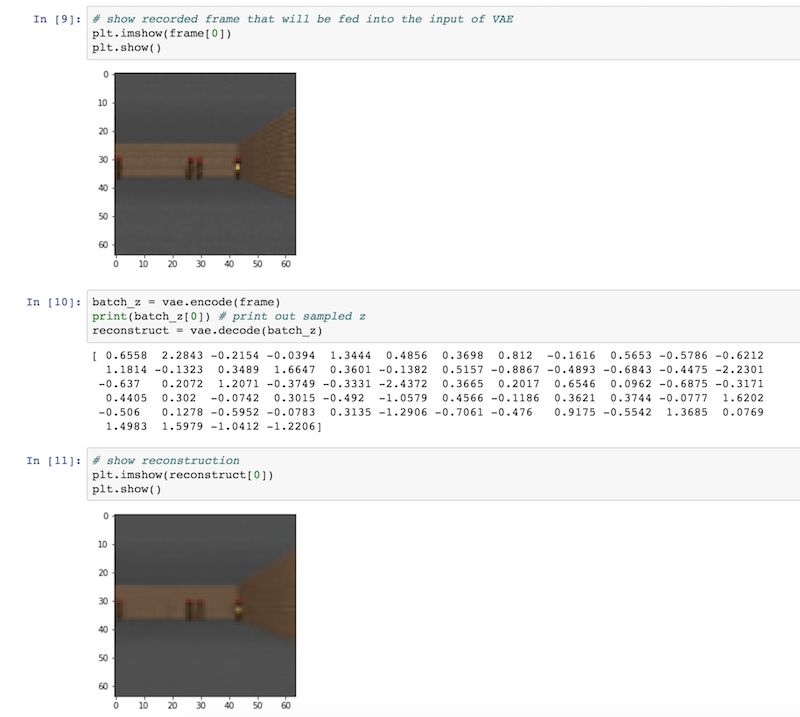 The notebook vae_test.ipynb will visualize input/reconstruction images using your VAE on the training dataset.

After V and M are trained, and you have the 3 new json files, you must must now copy vae.json, initial_z.json and rnn.json over to tf_models subdirectory and overwrite previous files that might be there. You should update your git repo with these new models using git add doomrnn/tf_models/*.json and committing the change to your fork. After you have done this, you can shutdown the GPU machine. You need to start the 64-core CPU instance again, log back into that machine.

Now on a 64-core CPU instance, run the CMA-ES based training by launching the command: python train.py inside the doomrnn directory. This will launch the evolution trainer and continue training until you Ctrl-C this job. The controller C will be trained inside of M’s generated environment with a temperature of 1.25. You can monitor progress using the plot_training_progress.ipynb notebook which loads the log files being generated. After 200 generations (or around 4-5 hours), it should be enough to get decent results, and you can stop this job. I left my job running for close to 1800 generations, although it doesn’t really add much value after 200 generations, so I prefer not to waste your money. Add all of the files inside log/*.json into your forked repo and then shutdown the instance.

Using your desktop instance, and pulling your forked repo again, you can now run the following to test your newly trained V, M, and C models.

You can replace doomreal with doomrnn or render to norender to try on the generated environment, or trying your agent 100 times.

The process for CarRacing-v0 is almost the same as the VizDoom example earlier, so I will discuss the differences in this section.

Since this environment is built using OpenGL, it relies on a graphics output even in no-render mode of the gym environment, so in a CloudVM box, I had to wrap the command with a headless X server. You can see that inside the extract.bash file in carracing directory, I run xvfb-run -a -s "-screen 0 1400x900x24 +extension RANDR" before the real command. Other than this, the procedure to collect data, and training the V and M model are the same as VizDoom.

Please note that after you train your VAE and MDN-RNN models, you must now copy vae.json, initial_z.json and rnn.json over to vae, initial_z, and rnn directories respectively (not tf_models like in DoomRNN), and overwrite previous files if they were there, and then update the forked repo as usual. 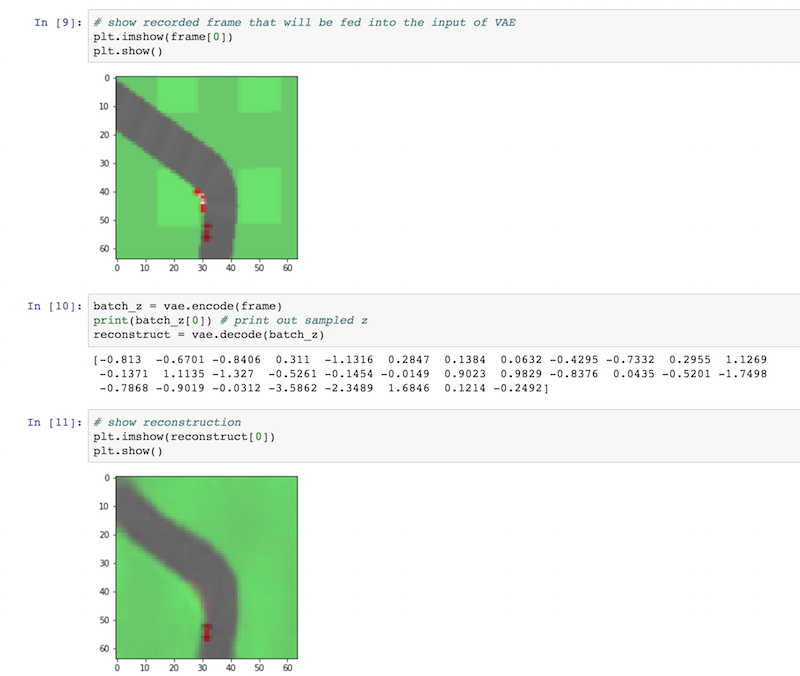 In this environment, we use the V and M model as model predictive control (MPC) and train the controller C on the actual environment, rather than inside of the generated environment. So rather than running python train.py you need to run gce_train.bash instead to use the headless X sessions to run the CMA-ES trainer. Because we train in the actual environment, training is slower compared to DoomRNN. By running the training inside a tmux session, you can monitor progress using the plot_training_progress.ipynb notebook by running Jupyter in another tmux session in parallel, which loads the log files being generated.

After 150-200 generations (or around 3 days), it should be enough to get around a mean score of ~ 880, which is pretty close to the required score of 900. If you don’t have a lot of money or credits to burn, I recommend you stop if you are satistifed with a score of 850+ (which is around a day of training). Qualitatively, a score of ~ 850-870 is not that much worse compared to our final agent that achieves 900+, and I don’t want to burn your hard-earned money on cloud credits. To get 900+ it might take weeks (who said getting SOTA was easy? :). The final models are saved in log/*.json and you can test and view them the usual way.

There are many cool ideas to try out – For instance, iterative training methods, transfer learning, intrinsic motivation, other environments.

If you want to extend the code and try out new things, I recommend modifying the code and trying it out to solve a specific new environment, and not try to improve the code to work for multiple environments at the same time. I find that for research work, and when trying to solve difficult environments, specific custom modifications are usually required. You are welcome to submit a pull request with a self-contained subdirectory that is tailored for a specific challenging environment that you had attempted to solve, with instructions in a README.md file in your subdirectory.

If you found this code useful in an academic setting, please cite: